In the course or driving your vehicle around or even when parked, there is always the chance that your vehicle will get a dent. A dent is a slight disfiguring of your vehicle body that can either be localized to one area or spread to different parts the body of the car. A dent lowers the appeal of your car. Repairing dents then become a priority. There are two main ways to repair a dent on your car; conventional auto body repair or paintless dent repair. Paintless dent repair is clearly the better of two options and for very practical and cost effective reasons. Let us do a comparative analysis of these two types of dent repair. 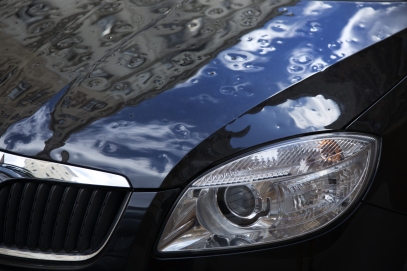 hail damage on a car hood

Conventional dent repair generally takes a few days or weeks depending on the severity of the damage and the availability of the right manufacture’s paint. This will leave you inconvenienced without a means of transport or force you to incur the extra cost of hiring a temporary vehicle. Again, conventional dent repair work involves several processes that are time-consuming and tedious.

This process begins with sanding the dented area and filling it up with filler or panel beating to a near perfect symmetry with the area near the dent. Panel beating will frequently leave the dent area structurally weak especially if it is near a joint. The next step is to try to match precisely the cars paint that is a very hard thing to do. Every car is designed uniquely with its paint color a defining part of this uniqueness. Drying the paint is a hard thing to do because there can never be a conducive environment to dry the paint correctly. Many auto repair shops prefer to bake the paint afterward. The goal of conventional dent repair work is to repair the dent to as near the factory finish as possible. Which is rarely achieved.

Paintless dent repair is now an accepted form of vehicle dent repair that is recognized and accepted by a lot of insurance companies which includes hail damage dent repair and dent repair caused by other natural calamities.

Meet the premier paintless dent removal service providers, Dent Pro of the Carolinas Mobile Dent Repair Charlotte. This company also offers mobile dent repair services to our customers. This goes a long way in reducing the inconvenience caused by driving your car to the repair shop for auto dent repair work and picking it later. Paintless dent repair is fast, economical and safe. Get in touch with us today to enjoy the benefits of our experienced and trained team of dent repair technicians.